Lalese Stamps, better known to her followers as Lolly — more on that later — is pure joy. Which makes getting the opportunity to interact with her in any small way, especially in these times, especially uplifting. Whether that’s via pottery wheel snippets on TikTok, a socially distanced hang at a local Columbus, Ohio watering hole (Antiques on High is a current favorite), or in this case, on the phone.

When asked if she’d rather receive interview questions by email or call, she chose the latter — despite the fact that her local business Lolly Lolly Ceramics has been keeping her busier than ever these past few months. It’s a challenge and responsibility that she does not take lightly. “I just signed a lease for a new, bigger studio space, so that alone makes this feel more of a reality. OK, now I have more space to actually produce, so how much more time can I dedicate to the work? Yea, I’m thinking about what my next steps are for sure.”

Before the press — and all the attention that comes with it — hit Lolly Lolly, Lalese had much humbler aspirations for her designs. “Three or so years ago, I took a class at a cultural arts center in Columbus and just kind of got into it. I studied abroad in London in the summer of 2017, and one way that I was recommended to raise money is my advisor said, ‘Well, you make ceramics, right? You should sell them.’ At that time I didn’t consider myself a ceramicist at all, I had just gotten into the craft, but I thought that was a good idea. So, I tried to sell my pieces at the Columbus Flea and ended up raising enough money for my study abroad experience. From that, people just kind of reached out and wanted more pieces and were really excited about what I was making. Honestly, all I can remember is coming back from studying abroad, finishing my last semester at school, and just continuing to sell things at markets. From that time, it’s just been a really slow growth, honestly up until the past two weeks.”

A lot has changed over the past few weeks and months for Lalese. And as an artist and Black woman, it would be impossible for things not to. ”I think the way that [2020] inspires my work is in that I want to figure out more ways to use my work for my community. I do have this new platform and this new level of attention... One example I thought of is offering classes to children. We defund the arts so much. That made me really excited, this whole movement, to really think of ways that I can use my skill set to be a bigger impact in my community. And it’s inspiring in general, because people are having more conversations and I think that’s just so cool. It makes me feel more empowered.”

Community is something that Lalese thinks about a lot. Born in Milwaukee, Columbus has been her home and community for the past nine years, “It’s been really cool to meet so many artists in the city, there are so many events that happen that it’s really easy. There are few galleries in town that are kind of grassroots as well, so it allows someone who might not make it to a bigger gallery to have shows… there’s this on-the-ground, for the people community of art, where people get to have the opportunity to show their work.” 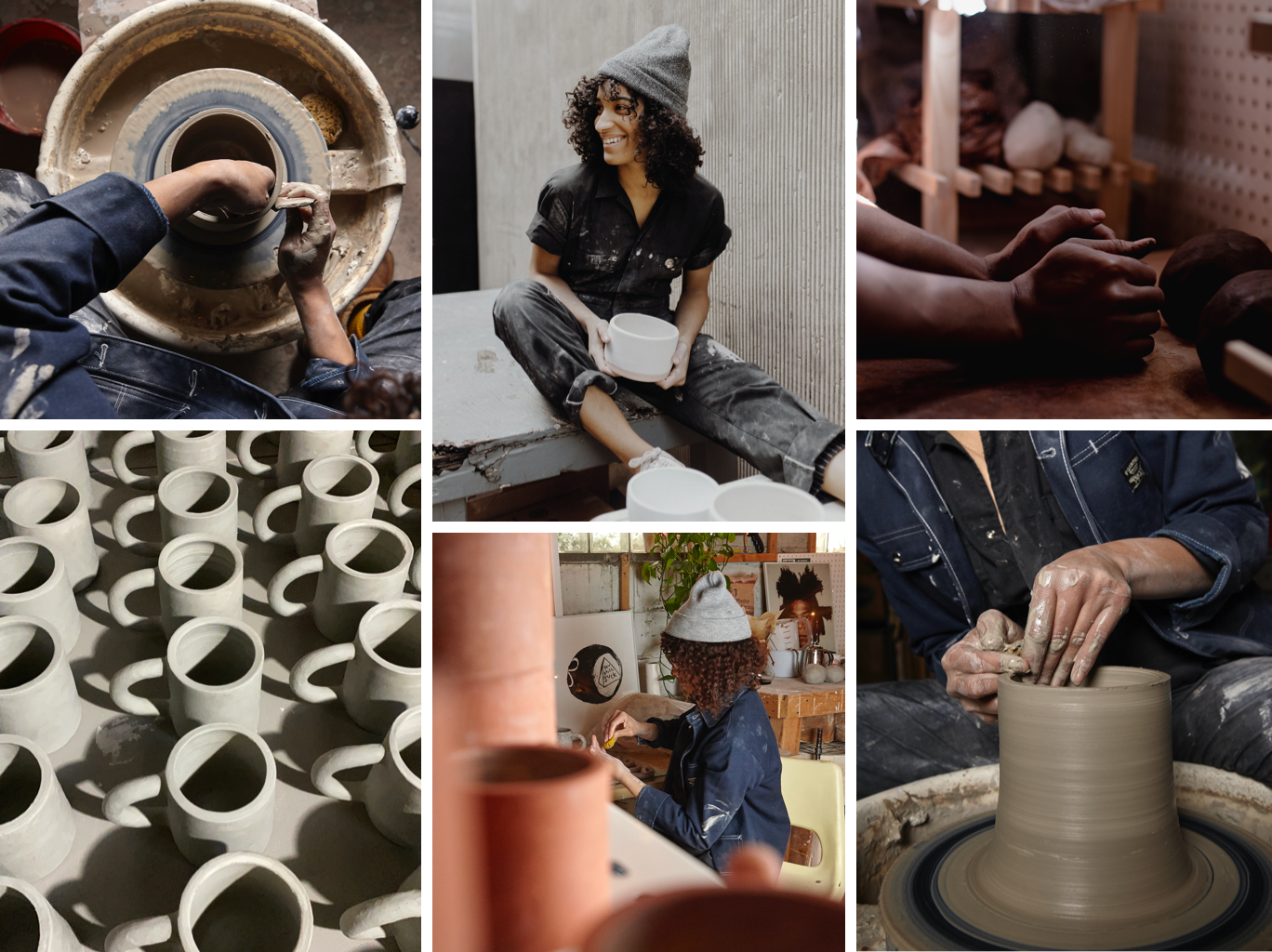 Columbus isn’t the first artistic community to welcome Lalese. In fact, where she goes, community often follows (again, pure joy). “When I went to study abroad, I had made a few connections with a collective of ceramicists based in the UK, the Clay Collective. I was following them on Instagram and reached out. They were so kind. Sophie, my contact there, was like ‘Yea, you should come by!’ We ended up getting a drink at the pub down the street and they showed me the space. It was a really cool experience to get to know fellow ceramicists. I think it’s that level of community that I appreciate.”

"I feel really proud to know that something that I made is a part of someone’s life. It might be such a small, mundane thing, but in times like this — everything’s so crazy — I think we really rely on those little moments to ourselves. They mean more than I think we really realize.”

As an artist, Lalese isn’t limited to the people she directly interacts with, rather she hopes to engage with everyone who owns her pieces. “A big component of my messaging is that ritual of drinking from a coffee mug. Decaf is something that I never really understood, until I pushed back on drinking caffeine as much. But it makes so much sense why decaf is an option for people, because it’s more about that experience. I can't even tell you how many people have reached out to me about one of my mugs and said, ‘I love the ritual of drinking out of your mug every morning.’ I feel really proud to know that something that I made is a part of someone’s life. It might be such a small, mundane thing, but in times like this — everything’s so crazy — I think we really rely on those little moments to ourselves. They mean more than I think we really realize.”

In this moment, the idea of connection could not be more palpable, or necessary. And Lalese clearly feels that weight. “Can you imagine? That makes me want to cry right now, the power in something like that — in knowing that I have a hand, literally and figuratively, in making that happen for people. I think that’s motivated me to continue making ceramics, to be honest. I didn’t know for sure if it was something that I wanted to continue... but I’m so empathetic, and I love making peoples’ day. Realizing how much I can do that in this craft has been such a treat. It makes a whole lot of sense for who I am as a person.”

"There’s something satisfying about making things that are really beautiful and also functional. And I think that’s what really drew me to making coffee mugs."

It also makes sense then, that Lalese would devote so much energy to mugs as an object, specifically through her 100 Day Project. In her 2019 contribution to the global digital art series (a forthcoming coffee table book on her submission is one of many current projects), Lalese specifically focused her attention on mug handles, challenging herself to create 100 unique designs, “There’s something satisfying about making things that are really beautiful and also functional. And I think that’s what really drew me to making coffee mugs. And maybe subconsciously, being a coffee drinker contributed to that. I think what really encouraged the 100 Day Project was this urge to push myself — I was so bored, honestly. So I thought, I’ll try this 100 Day Project. Other ceramicists have done similar things, and other artists have done 100 Day Projects, I would remiss not to acknowledge people who have come before me. But, I think the reason my project stood out so much is because of the consistency. If you followed me during the time I was releasing mugs, that was a really special experience for me and everyone who followed me. Just being able to wake up and see the new mug handle. It was a fun thing to experience.”

Social media isn’t something new to Lalese, but it’s something she’s new to embracing. “In the past, I’ve denied the power of social media — maybe not denied it, but pushed it to the side and didn't give it the credit it was due. But in the past year, especially because I’ve been able to leverage Instagram, I’ve given it more credit and I really appreciate the power." Grappling with the push-pull many of us feel today, Lalese resolved, "I don’t like to be on my phone a ton and being on those platforms almost made me feel guilty, but at the same time it’s such an important platform — so many people reach out to me to inquire about and share my work. So for me, I’ve been finding ways to show more of my process. I’ve kind of taken a pause at the moment, being honest on the platform is so important — acknowledging what’s happening in the world right now — especially now that I have this bigger reach. I feel like it would be bad taste to not use that platform to draw attention and speak out about things that are important.”

It becomes clear when talking to Lalese why she prefers more human interaction to those found on the phone. That’s part of the reason she’s carved out such a home in her local coffee community. Counting her favorites with the enthusiasm she devotes to her own projects, (there’s One Line Coffee, Mission Coffee Co, Brioso, Upper Cup Coffee Co, to name a few), Lalese explains, “I have a lot of friends who work in coffee, and it’s been such a treat because I’ve learned so much. I think it’s really fun! That culture of coffee’s always done such a good job of creating community and having conversations about where the coffee is sourced from and giving credit where it’s due — at least from my experience in Columbus.” Lalese tells a story of a friend who opened a pop-up window to raise money for organizations while his shop was shut down due to the coronavirus. “I've always appreciated the way coffee has brought people together.” 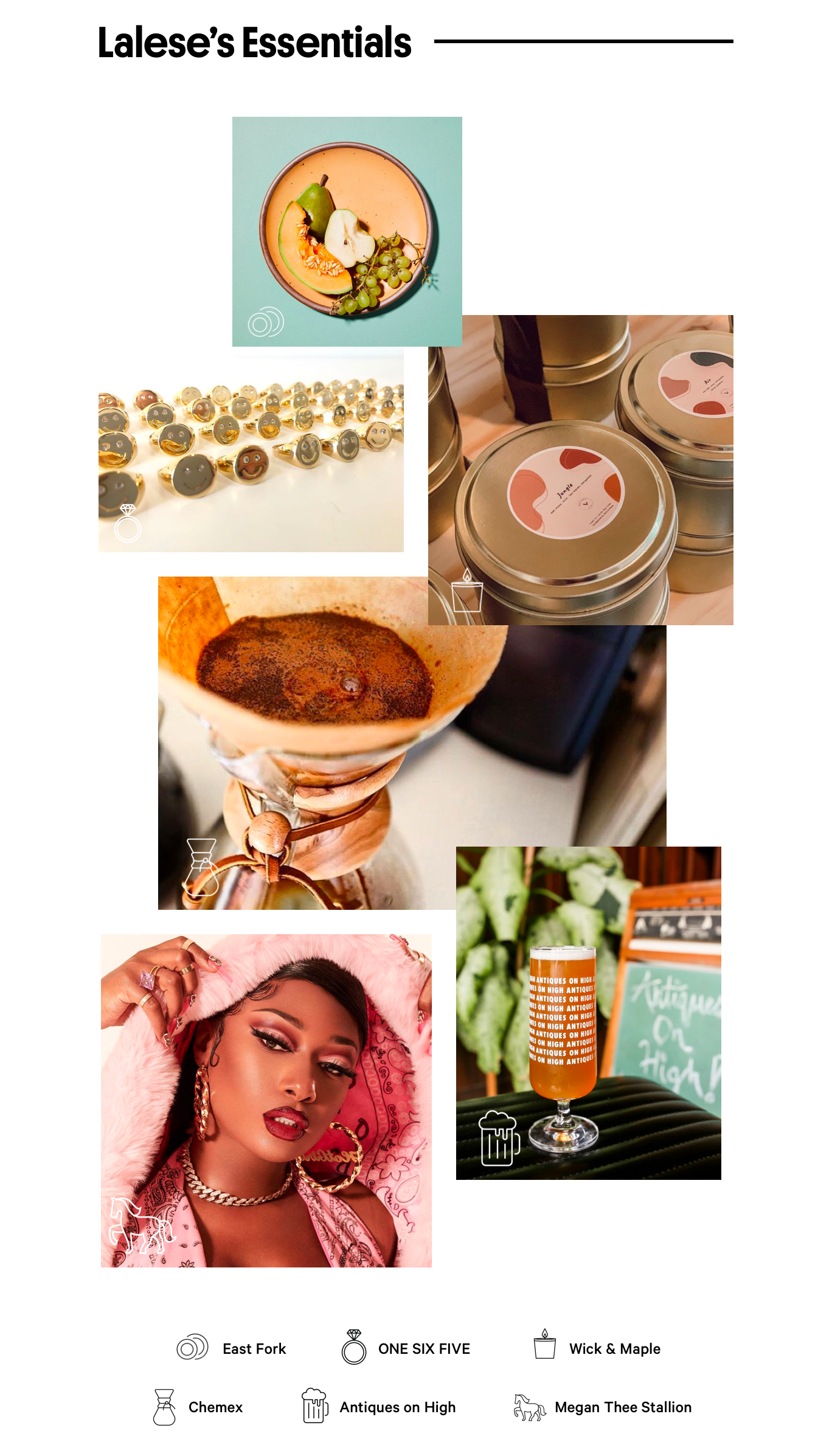 So, what’s next for Lalese? Well, there’s that aforementioned larger studio space, the coffee table book, dinnerware, and e-commerce launching with a new brand visual come September. In that messaging, Lalese would like to clear up one mystery in particular: Who is Lolly? “Lolly is my nickname. It’s really strange, because not a lot of people know me as Lolly except a few friends back home. That name came from one of my high school teachers, she started calling me Lolly out of the blue and it just kind of stuck. I never really bothered her about it, I just thought it was cute. Towards the end of the school year, I just had to ask her about it and I said, ‘Ms. RZ why do you call me Lolly?’ And she said, ‘My parents used to call me Lolly when I was younger and I just thought it was a great nickname for you.’ OK, that’s really freaking sweet.”

In talking to Lalese, the name makes all the sense in the word: playful, spirited, and then there’s that joy. So, while Lalese has her hands full with more than just clay these days, it’s a challenge she embraces and takes on with enthusiasm. While staying in the moment and being present, what’s next could be just tomorrow’s cup of Chemex coffee — preferably one that someone else, like her partner Jordan, makes for her, “I am so busy and he is equally as busy. But I think he recognizes that. Especially lately, it’s just been a mentally draining time. Making the coffee or bringing a plate of food over by me, that actually means a lot.”