This Baker Is Helping Workers Flourish

Chelsea Kravitz won't take "no" for an answer.

"That’s part of what makes it such a laborious job to do. You’re on your feet, you’re picking up all of these heavy things — the amount of people who are shocked at what I can pick up with ease. It’s like listen, I carry 100-pound bags of flour around. I don’t look as strong as I am, but I can carry it." True, when Chelsea Kravitz speaks of fortitude, it’s in reference to the physical act of baking, but the same applies generally. Chelsea’s bearing a heavy weight and she’s up for the challenge.

And as is the case in 2020, that weight has been substantially heavier than in years past. “The pandemic exposed what many inside the industry always knew; there is no stability or security for workers.” Chelsea said. That’s why, in what may be the most trying time to do so, Chelsea is leaving her modest home bakery to follow her dream of opening her own baking business. “I haven’t officially announced this yet, but I’m opening my own restaurant and bake shop. It was very weird timing... we actually got the last permit we were waiting on to go through on March 13, when everything shut down. And I was like, ‘Well, that’s just great timing.’”

"... if I was open right now, how would we be handling this? What would we do to preserve the jobs of our staff?"

What some might lament as unfortunate circumstances, Chelsea takes as an opportunity to develop her own bakery business plan. “I spent the first couple of weeks looking over my business plan and making a game plan for, if I was open right now, how would we be handling this? What would we do to preserve the jobs of our staff? It’s always been really important to me to have a business that values people over profit… I think it’s more important to pay people a living wage, to provide benefits for them, and to treat them with dignity and respect, than to have extra profit in my pocket at the end of the day.”

2020 isn’t the first time Chelsea sought salvation through baking — that started far before the pandemic and way simpler than with workers’ rights. “I always did a lot of holiday baking with my family when I was a kid — it was a hobby, it was something fun to do, it was artistic. I would make things for my friends in high school, sugar cookies and fun little treats. And it always made me feel good that other people felt good when they got them. And then I pretty much torpedoed my entire life with drugs and alcohol in my teenage years... I would work in restaurants and party afterwards, and that was pretty much it. After I got sober at 19, I moved to upstate New York. It was a very quiet area, which was what I needed. There wasn’t much to do, so I spent all of my time baking. And I had all of these farms right where I lived and would go there and try whatever was local and in-season. I would buy the seconds of things that had little brown spots and I’d bake with them. And that was really where it started for me as far as, oh maybe this is actually a career path.”

It wasn’t until she returned to her Long Island community, that she decided exactly what she would do with all the practice logged upstate. “Where I am, I see a really great need for a business like the one that I'm talking about... there’s not really somewhere that’s comfortable and casual, but also beautiful that you can go and have a nice breakfast, have a nice coffee. There’s not really anywhere for modern pastry, there’s a lot of French, Italian — very old school, very traditional.”

For the nice breakfast piece (her signature bakery item is a warm and spicy ginger molasses cookie filled with cream cheese frosting, reminiscent of those oatmeal sandwich cookies you’d get in the cafeteria), Chelsea instinctively knew, “I really enjoy working with exciting flavors and a lot of those come from other cultures, ingredients like turmeric and cardamom and passion fruit and guava.” For the nice coffee part, Chelsea looked to some of her favorite roasters. “I am a serious coffee lover, it’s probably one of my more obsessive habits. Right now I’m working on a consulting project with Southdown Coffee, which is from Huntington. It’s very much my hometown coffee roaster. I love Tandem Coffee Roasters, Kathleen and Will [Pratt] have done an amazing job and they have Briana Holt as a baker, she’s just incredible. That was where I wanted to go, I was like, 'I’m going to leave Long Island. I’m going to go to Portland, Maine.' And then Jen Apodaca of Mother Tongue Coffee in Oakland, California has a really beautiful mission of making coffee roasting more accessible — often women and people of color are left out of roasting and the top part of the business and that's really important to her — and her coffee is also just ridiculously good.” It's these factors that Chelsea has considered to build a successful bakery. As a small business owner, she's using her creative freedom to set herself apart in the bakery industry.

For Chelsea, the connection between coffee and humans (each morning she makes a batch in her double-walled stainless steel French press and shares one cup with her boyfriend, “If he drank half my coffee, it would maybe be a problem. I’ll share, but not that much.”) is as natural as the link between coffee’s bitterness and sweet ingredients. “I love using coffee in desserts. Brewed espresso that’s been cooled down adds a lot of flavor, and I put it in most of my chocolate. It gives it this really beautiful round and full flavor. It pairs really well with fruit, it goes really well with caramel, it just kind of elevates it… every coffee has a different flavor profile, so I think it’s a really cool thing to have pastries and desserts that complement the flavors in that coffee. So, if you have something that has notes of caramel, or cherries, or anything like that, pair it with something that's going to elevate those flavors rather than dampen them." 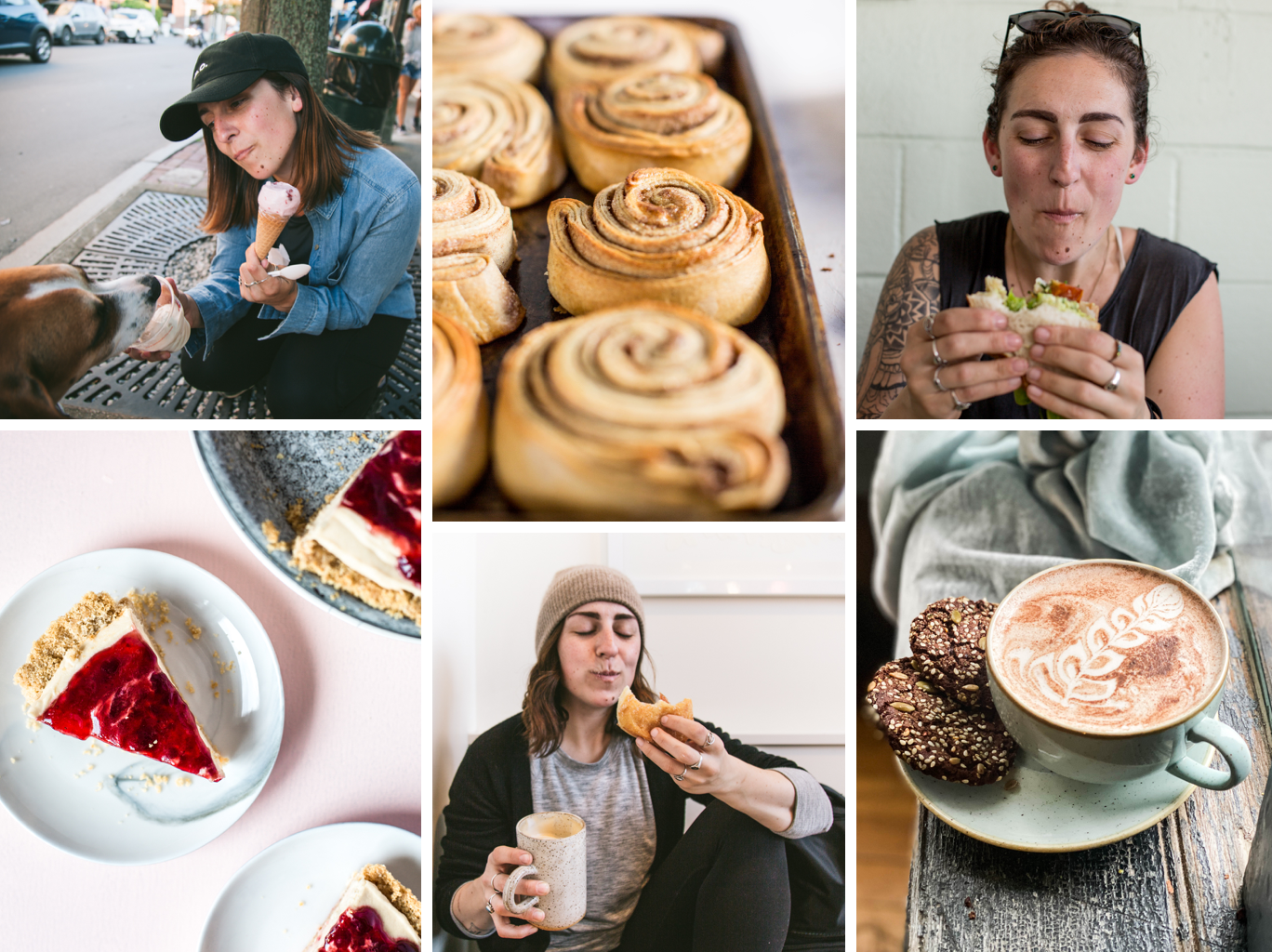 Like so many of us, Chelsea has been spending more time indoors baking and yes, that includes sourdough. She expands on her journey with baked bread, specifically the somewhat therapeutic effects of making this baked good. “It’s kind of its own little ritual. When you’re taking care of a sourdough starter, you come up with your little schedule. It’s almost the same with your morning coffee ritual, you take it out and you start the water, then you grind the beans, and then you pour the water. Same with a sourdough starter, you take some out and you put it aside to use it for something else. Then you add in your water and your flour. Working with dough, I think it’s good for people, you get your hands in it and beat it up and get your frustration out. It’s actually very relaxing to have to knead the dough, because you’re getting some of that physical tension out.”

"I view myself not so much as being self-taught, but community-taught."

Chelsea applies that principle to her own life — words don’t define her. “For people just getting started, reach out and ask people questions. The worst they’re going to say is 'no'. There are so many amazing people in this community, in food, in beverage, in activism, in so many different capacities that if you just reach out and ask, they’re happy to share. I’m illustrating a deck of tarot cards and each one has someone in and around the world of food who has really inspired me. It’s mostly women, I find that women in food are so generous and inspiring, and they work so hard to do better and do more. I think because I’m not traditionally taught — I didn't go to culinary school, I didn’t stage, and I didnt work my way up the line, started my own business on the side and did it my way — because of that, I view myself not so much as being self-taught, but community-taught. There are so many people and so many resources that are sharing, and even just having conversations with people, you learn so much.”

The subject of art is one Chelsea continues to return to in her baked goods. It’s something of a dual passion for her that she's using to inspire her own bakery business. “I’ve always been interested in art and food and I couldn't really decide what I wanted to do when I grew up other than be a mermaid, so I went with food.” When the pandemic struck, it was back to art with a series of illustrations for a cause. “I started working on those drawings and figured, I’ll throw them up on my website and if I could raise a couple hundred bucks, it’s better than nothing. I don’t have a lot to give personally, but I have a laser printer. And then I raised over $15,000. Each one has a different business or cause that it's supporting.” As far as choosing which causes to benefit as a small business owner, “It started with specific food businesses and restaurants, either I know them or love them, like Turkey and the Wolf down in New Orleans. It's a really great crew of people — they’ve been doing it right for a while now and it’s really refreshing to see.” 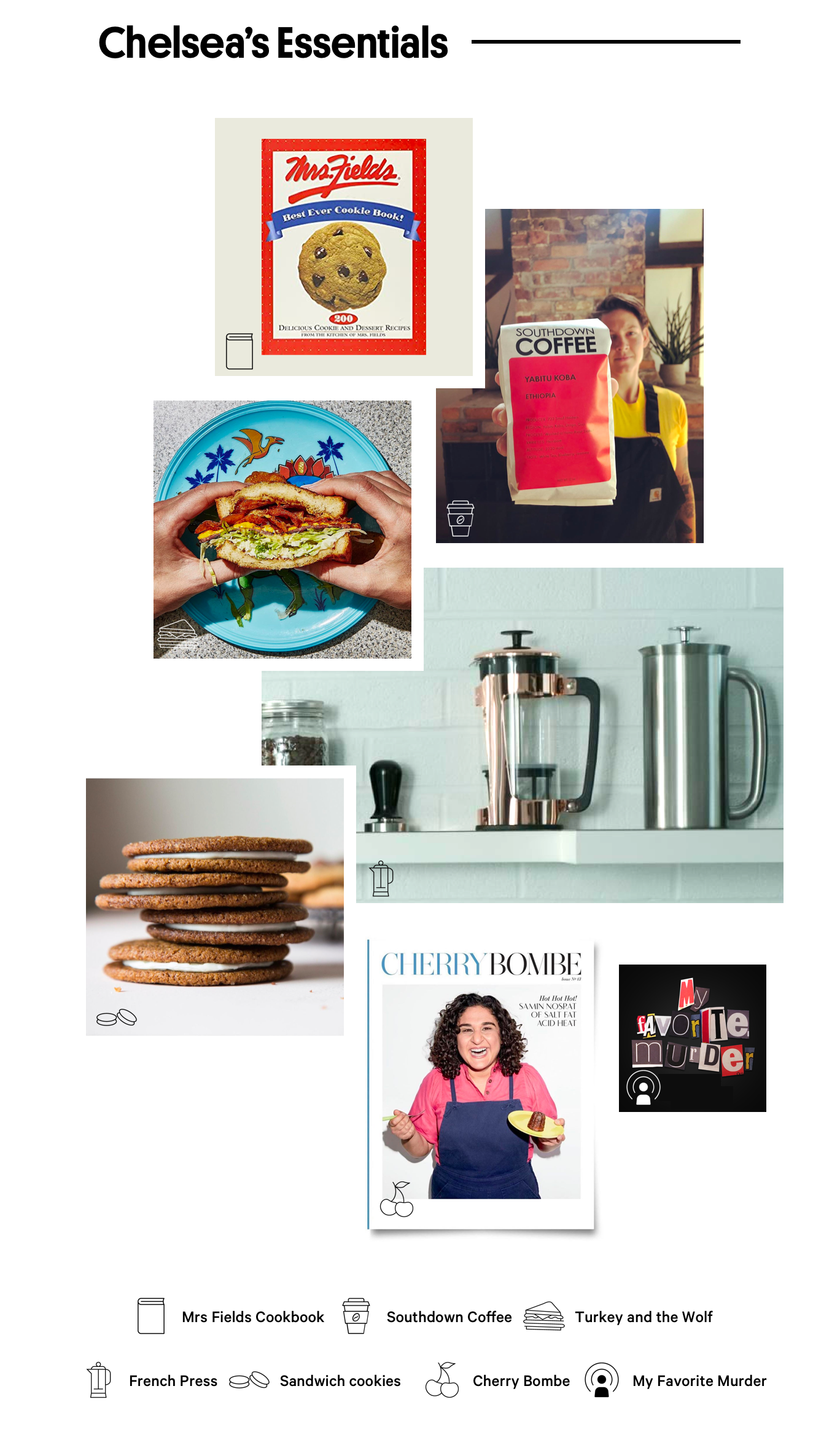 And Chelsea is incredibly focused on becoming one of those businesses doing it right. “During this pandemic, millions of workers have been left out in the cold. As someone opening their own bakeshop/restaurant — who has worked for so many other people over the last 15 years — I believe wholeheartedly that you cannot build anything alone. Your business is a product of the people within it and you are nothing without your team. This should be reflected in actionable ways, not just verbal praise... I chose the name Flourish Bakeshop & Café for my business, because it is what I believe in. We can all grow and prosper from a healthy and beneficial environment. That is what I hope to provide to my future team and what all businesses should aspire to.”