Cxffeeblack and Stay Golden Are on a Mission Together

"Specialty coffee needs to rethink what it means to be inclusive of the Black community — not just with how our cafés look, but with how much opportunity Black people are given to own/operate coffee businesses." It's a message made clear by Stay Golden Coffee Co. and one that the larger coffee community is waking up to. "Nashville's coffee scene is super white. It's something we've wanted to change and grow," Stay Golden asserts. "We also love Memphis and are always looking for ways to support what's happening there. As a team we started asking ourselves how we could make coffee more diverse in Middle Tennessee."

Enter Cxffeeblack, founded by an old friend of the roastery, Bartholomew Jones, and his co-founder, Renata Henderson. "We've been Instagram friends with Bartholomew for years and years now. Back when we owned Steadfast Coffee he would always visit when he was in town and we followed along as he launched Cxffeeblack. So, we knew of each other and loved what he was doing in Memphis. Last year, after George Floyd, Sean (Stewart) reached out to see how we could do something bigger together. We wanted to do everything we could to support Cxffeeblack's mission."

The fruits of their labor arrived this month with the release of 1616, a Cxffeeblack collaboration, "1616 is a step towards that diversity. A lot of this we've learned from Bartholomew and we just want to keep this conversation going and help open up more people's eyes. We don't have all the answers, but we are trying to make conscious steps to be anti-racist."

The first step, as is often the case, was coffee, "Sean tasted about 50 different African coffees before he landed on this one. He wanted something that fit the flavor profile of other Cxffeeblack coffees and we just think this coffee is beautiful. It's floral and peachy."

Significantly, the coffee comes to us from the Nano Challa Cooperative "It is one of those groups that we've heard of for a really long time," Stay Golden tells us. "We've all had a Nano Challa coffee throughout our years in the coffee industry. But, it wasn't until we tasted this coffee and decided to purchase it that we really delved deeper into the work they do. They are so intensely focused on cup quality. They have really high standards for what they do and you can taste that in the cup. We love that they focus on education and want to help the local Ethiopia community grow and move forward so they can create their own wealth in the country through producing coffee."

The bag design and much of the rest, "Was all Bartholomew. We just took what he envisioned and made it happen in real life. We wanted the bag to be a statement and draw people in to educate them. We hope it achieves that."

We spoke with Bartholomew to learn more about 1616, Cxffeeblack, and their shared mission.

Cxffeeblack is a social enterprise that seeks to reintroduce the Black history of coffee into Black communities and help reimagine its Black future through the intersection of coffee and hip hop culture. Cxffee was first stolen from Africa in 1616 at Port of Mocha. Three years later the first stolen African bodies landed in Jamestown Virginia. 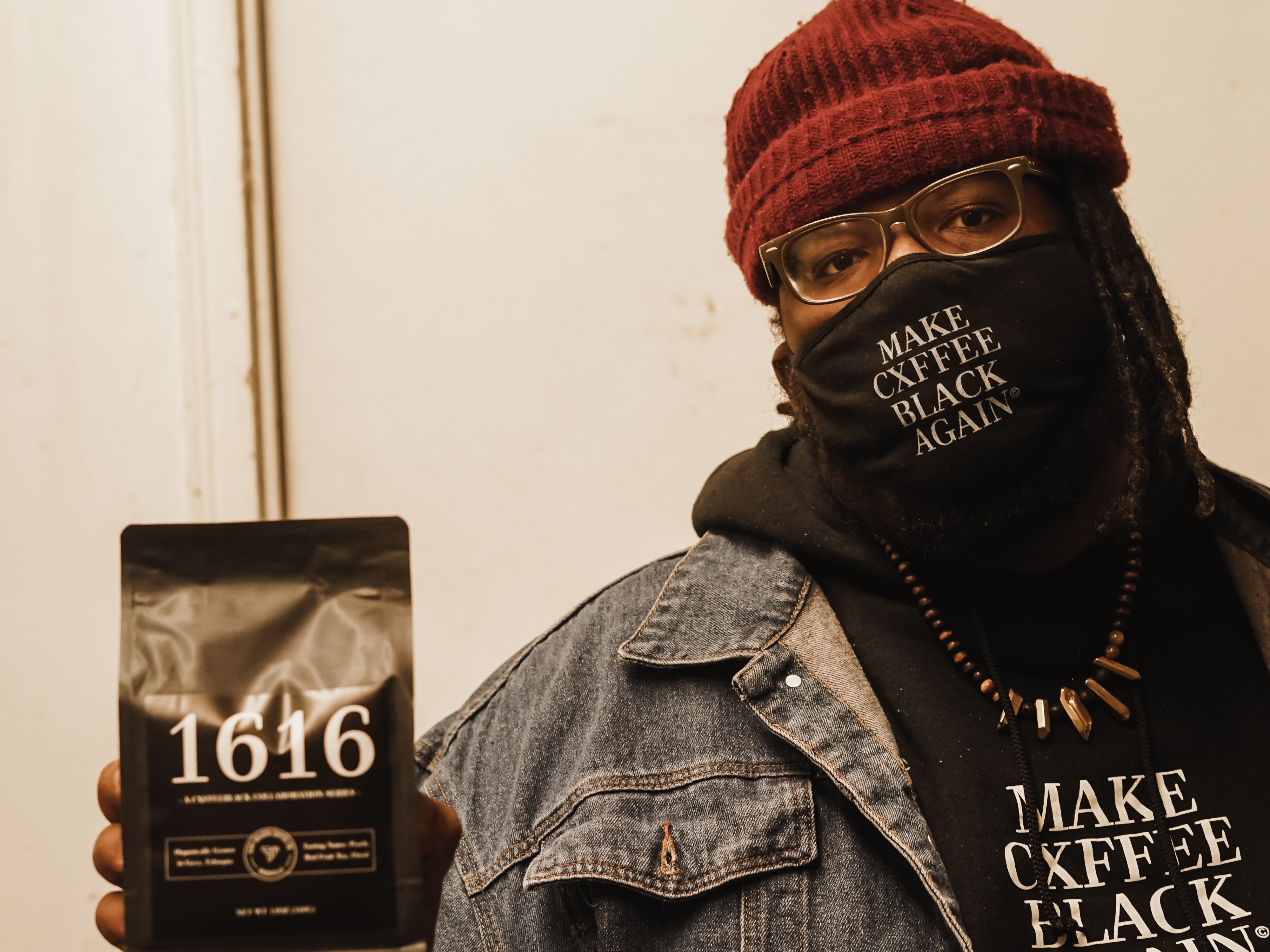 We believe that by learning from our African origins, we can sample our cultural heritage and elevate our present experience. Guji Mane Cxffee is diaspora history, and it, like us, was meant to be taken black. No sugar. No cream. The way God intended.

Tell us about your local Memphis coffee community.

The Memphis coffee Community is one of the most amazing communities I've ever been a part of in regards to third-wave coffee. I don't think our company could have grown into what it is in any other kind of environment. There is a really amazing amount of accessibility and a relative lack of self indulgent snob culture.

Additionally, Memphis is a blue-collar city. So the coffee Community here seems to follow that aesthetic. Our theme for our NBA team, the Grizzlies, is "Grit and Grind". And the coffee scene matches that. All puns intended.

The coffee Community is super collaborative, there aren’t really super stars. It’s more about how we can collaborate to impact the people of the city. Memphis is an overall pretty poor city due to its past, but has a lot of creative potential and a really beautiful history.

That being said, We started Cxffeeblack because we just felt like there was a need for a space in the scene that specifically addresses the Black community. Memphis is a 67 percent Black city, but there wasn't really anything in coffee directly addressing that Black population or trying to meet their needs through coffee. And so we really felt like we were at a unique space having been already welcomed into the larger coffee community, to create something that we thought would serve the needs of our own community and specifically address that demographic — especially considering the amount of Black history and innovation within coffee's storied past. 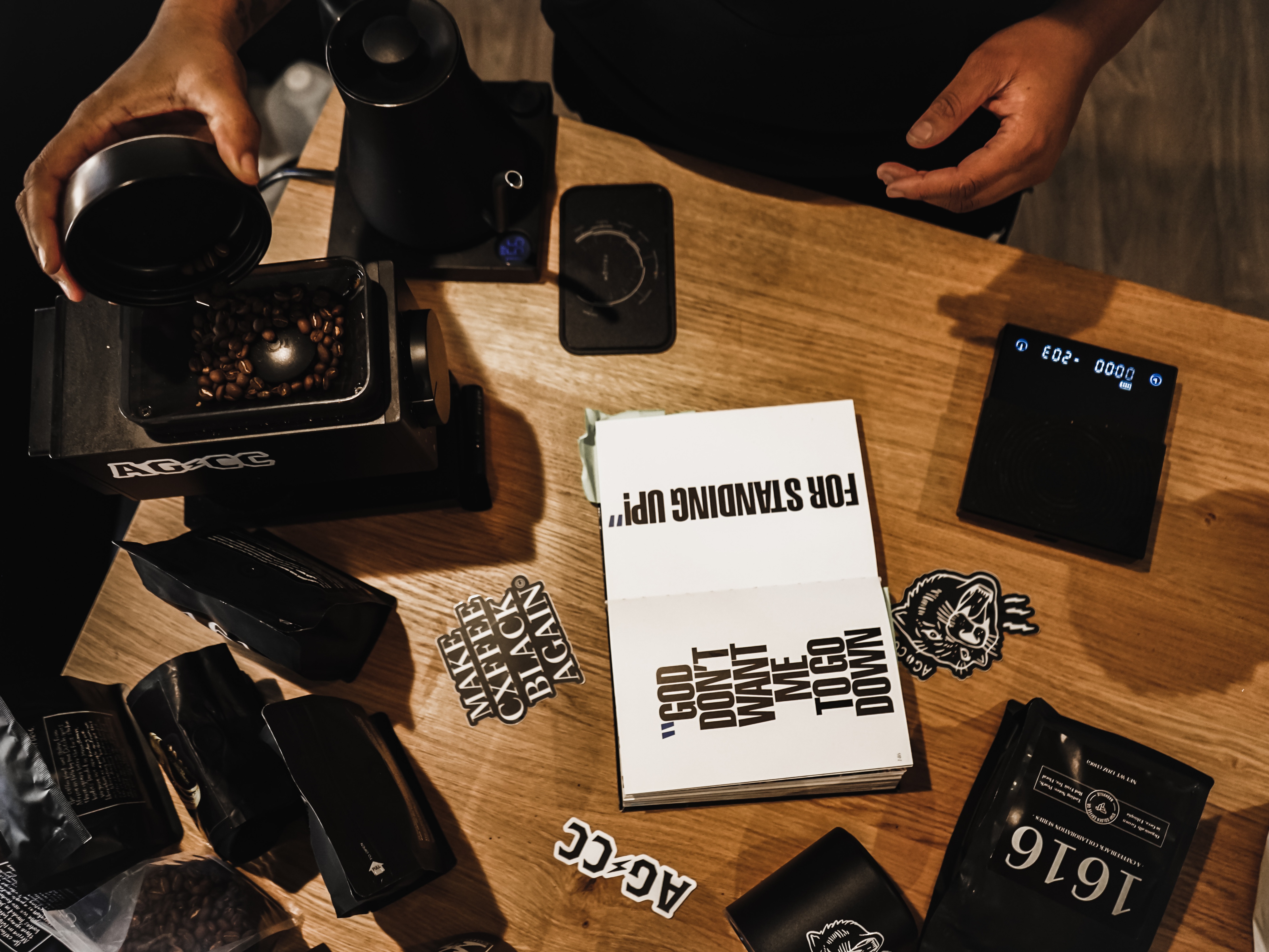 The 1616 series came about as we saw a need for more education around the history of coffee beyond our brand. As we grew, a lot of coffee brands reached out asking how they could partner in the work we were doing, so we thought it was a perfect opportunity to open up our pursuit of Black education and Black equity in a collaborative space.

We began to partner with some of our favorite roasters to spread the educational information about the Black history of coffee to other consumer markets within coffee through companies who shared our vision but had access to larger platforms. That goal is to develop a full curriculum for schools and other community spaces in Black communities, and the coffees we’re curating with people like Stay Golden and Onyx via the 1616 Project allow us to fund that work. It's really been beautiful, because we're showing that Black people can be represented and be a part of the conversation from an equity perspective as well as an educational one.

How did you decide on the name?

It's said that the coffee plant was first stolen from Africa at Port of Mocha in 1616 by two Dutch spies. Although the Dutch ultimately failed to cultivate their stolen goods, they did spark a global colonization effort built on the backs of Black and indigenous slave labor.

We chose the name as part of a education project we’re building to spread more awareness about the Black history of coffee and the connection between coffee and the atlantic slave trade. The coffee plant, a plant discovered by Africans and stolen by European Colonial powers, has grown into a 100 billion dollar industry, Meanwhile, the African diaspora still suffers from the effects of colonialism and slavery. We want the 1616 Project to educate more people about the opportunity for that wealth to address the needs of formerly enslaved and colonized people. It only makes sense to start and fund this project through selling Black-grown coffees in tandem with the history that has been lost to so many.

Why did you choose to partner with Stay Golden?

It’s no surprise that we chose to partner with Stay Golden. Their hospitality towards us in our coffee journey made an impact on us since we first met Sean in 2015. We met Sean back when Cxffeeblack was more of a concept based on a couple metaphors in my raps. (You can hear some of those on the Cxffeeblack album we dropped last year). The spaces they were curating were some of the only spots where my wife Renata was able to have a really positive experience as a Black woman. We always remember whenever we were in Nashville having to stop by and grab coffee from Sean and the gang because of the inviting environment they had created. 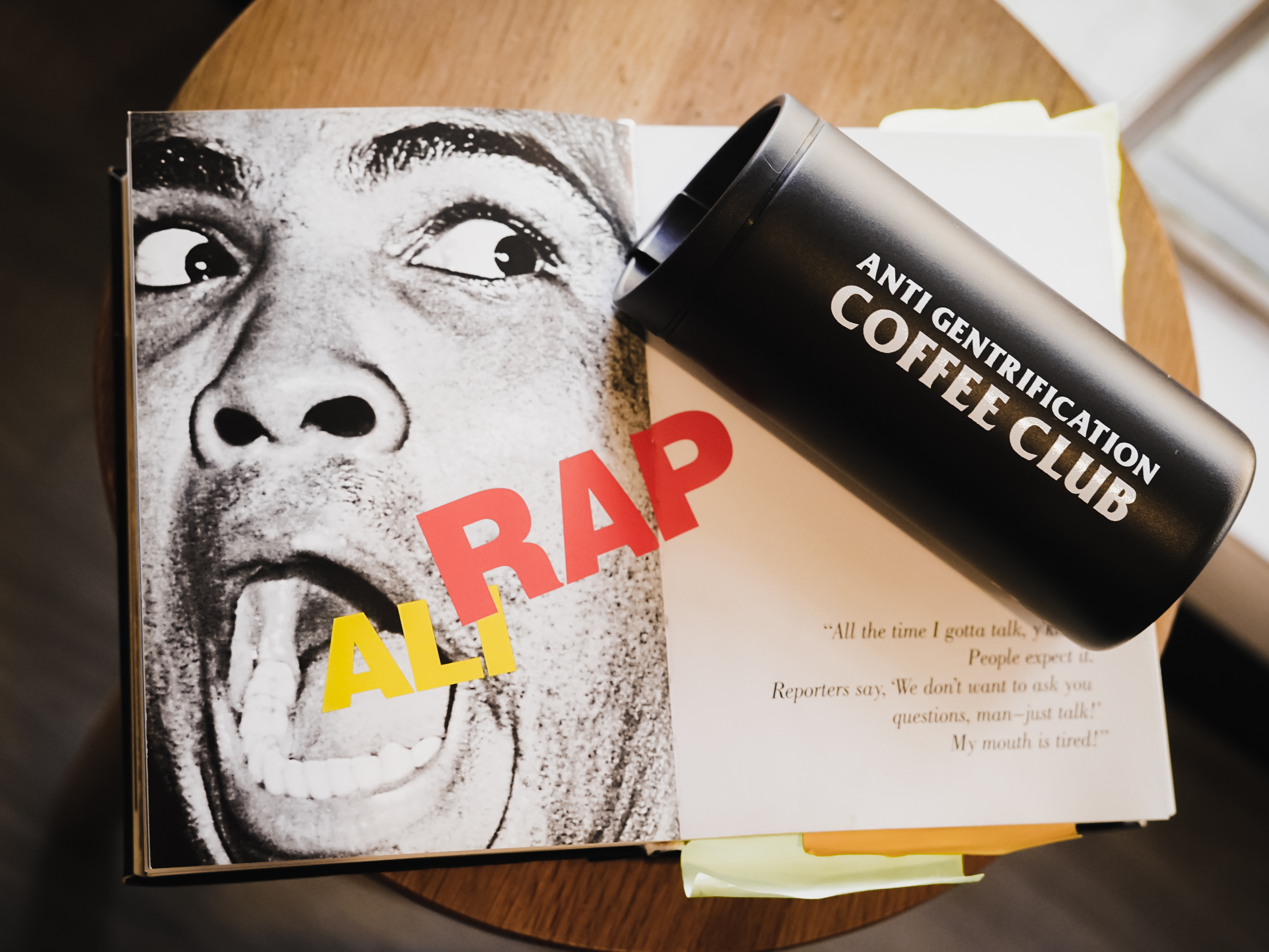 As a Black-owned business we haven’t had any funding, so I spent most of last year driving around the Southeast trying to find affordable coffee since most weeks we couldn't afford to pay for shipping. Sean and his company fronted us three sacks when we were in a bind last year, and that sealed the deal. We knew we had to stay connected at that point. We drove to Nashville, had an amazing time, which led to a conversation about greater collaboration.

Initially, we actually were intending to collaborate with them to purchase a large amount of coffee from an Oromo importer who we had built a relationship name Ibrahim, but after all the unrest in Ethiopia due to Oromo persecution, we lost contact with him. And so we move forward with the collaboration on another beautiful Ethiopian coffee, with the goal of using it as a canvas to spark greater awareness about the Black history of coffee. I know sometimes posting this type of History can be controversial, but for Black folks it's not really a controversy we have the luxury of ignoring. There’s so much of our history that’s been lost. Rediscovering these stories is an act of self-preservation at this point. Stay Golden's choice to enter that tension with the Black community as an act of love for human beings is a really beautiful perspective. We were very excited about their solidarity with us and really believe communicating these messages are going to empower a ton of Black kids in the next generation.

What changes have you seen this past year within coffee?

Recently we've seen a rise of Black representation within the coffee space, especially after George Floyd was killed. People became very interested in learning about and finding and representing Black folks in coffee in the month of June. Unfortunately, we've seen a lot of the support dwindle.

What changes do you hope to see going forward?

So many shops are participating in the gentrification of a lot of poor neighborhoods, and our desire is to see more business take advantage of coffee's ability to empower Black and Brown communities and not tolerate them. We hope that these 1616 collaborations with companies like Stay Golden and Onyx provide a starting point for shops to provide that empowerment. We really believe coffee can be something that is not only from Black communities and Brown communities but also FOR them as well. 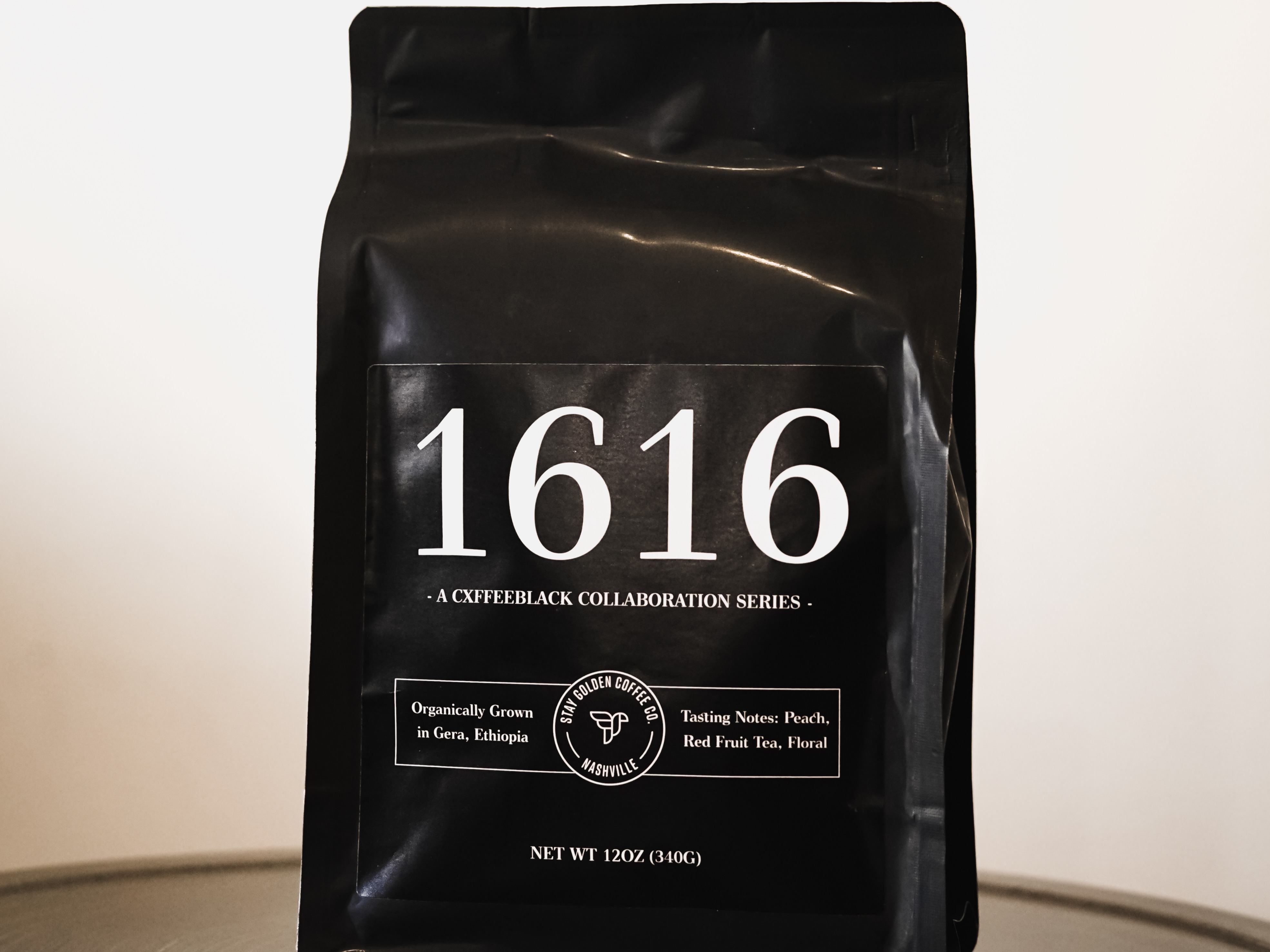