$2 from every Act for All Coffee supports their cause.

One of the most direct paths to a cooler climate is building along the existing work of farmers and community-led vessels like Grow Ahead, a crowdfunding initiative that succeeds in making our massive coffee world more sustainable through smaller steps and deeper roots.

Like so many bright ideas, it started with coffee. Grow Ahead’s core members saw a disparity in sustainable agriculture, brazen as a dark roast brew, and beginning in 2013 formed the base of what would eventually become a working web of small-scale farming organizations and community-driven projects that work in tandem to fight the climate crisis.

Julia Gentner, Grow Ahead’s Project Manager, believes a shift in perspective is key to understanding what is required for a balanced future.

“Our work is really centered around flipping traditional development and trusting Indigenous expertise,” Gentner said. “The coffee industry has to reckon with its colonial roots and the ways it has displaced Indigenous communities across the Americas and across the globe.”

Among Grow Ahead’s roster of co-ops and micro-farmers, Café Organico Marcala (COMSA) is a veteran to the green game and has worked alongside Grow Ahead for years. COMSA’s reforestation project provides the foundation for Wonderstate’s exclusive Act for All Coffee: Organic Resilience Blend, an effort that seeks to support the development of an agroforestry system in Honduras. Every bag sold will cover the cost of planting a tree in this system and while 40,000 trees may seem like a steep hike, the ferocities of COVID-19 demand a complete recovery.

“Although the term ‘agroforestry’ is newer, this is not a new practice,” Gentner explained. “Indigenous communities have been growing food in forest systems for thousands of years, so our work has to be centered on working with nature and not against it.”

Lessons of the land continue to drive household favorites like Wonderstate in their conservation efforts as well as Grow Ahead and their cohabitation with Cooperative Coffees, a green coffee importing cooperative, of which Wonderstate is a roaster-member.

“Our mission is to support resiliency led by people at the front lines of the climate crisis,” Gentner said, “and a lot of the work being done, especially by farmers, is specifically undoing the colonial models that prioritize short-term profit over long-term sustainability.”

Unifying coffee growers and giving the microphone to movements on the ground clears the way for smart, effective change that can only be nurtured on the local level. Grow Ahead empowers the farmer through campaigns like the women-led Reforestation Project in Brazil, which aims to plant 51,000 trees through agroforestry. Most of their campaigns envelope South and Central America, however, this year will see the arrival of work with cocoa farmers in West Africa as well as potential projects in India and Indonesia.

Despite the grueling work coming from the coffee lands, perhaps the heavy lifting ought to come out of the Northern hemisphere, which accounts for ninety-two percent of global carbon emissions. Are we really just going to sit back and allow the farmers to clean up a mess that half the planet has perpetuated?

“Countries in the Global South are experiencing the biggest impact of climate change,” Gentner said. “Indigenous and rural communities protect eighty percent of the biodiversity on the planet yet are given little support or resources.”

Gentner studied Human Rights in Latin America while attending University in Seattle, and it was during this time she made the connection between the coffee she drank and the conditions in which it was being made. “We cannot separate social issues from environmental issues,” she explained, “I didn’t come into this work from the coffee industry, but it’s been a really great experience to learn about the histories of people committed to equitable trade within a largely exploitative industry.”

Gentner sees a bigger picture on the fight for a climate awakening. “Being leaders in a fair, sustainable coffee industry requires some big changes,” she said, “and climate justice is also racial justice, economic justice, labor justice...it’s so much more than just soil or trees or carbon emissions.”

Thankfully, there are many ways we can approach these deficiencies. If we start small, we have more room to grow, and with units like Wonderstate and Grow Ahead taking the lead, the sky is the limit. 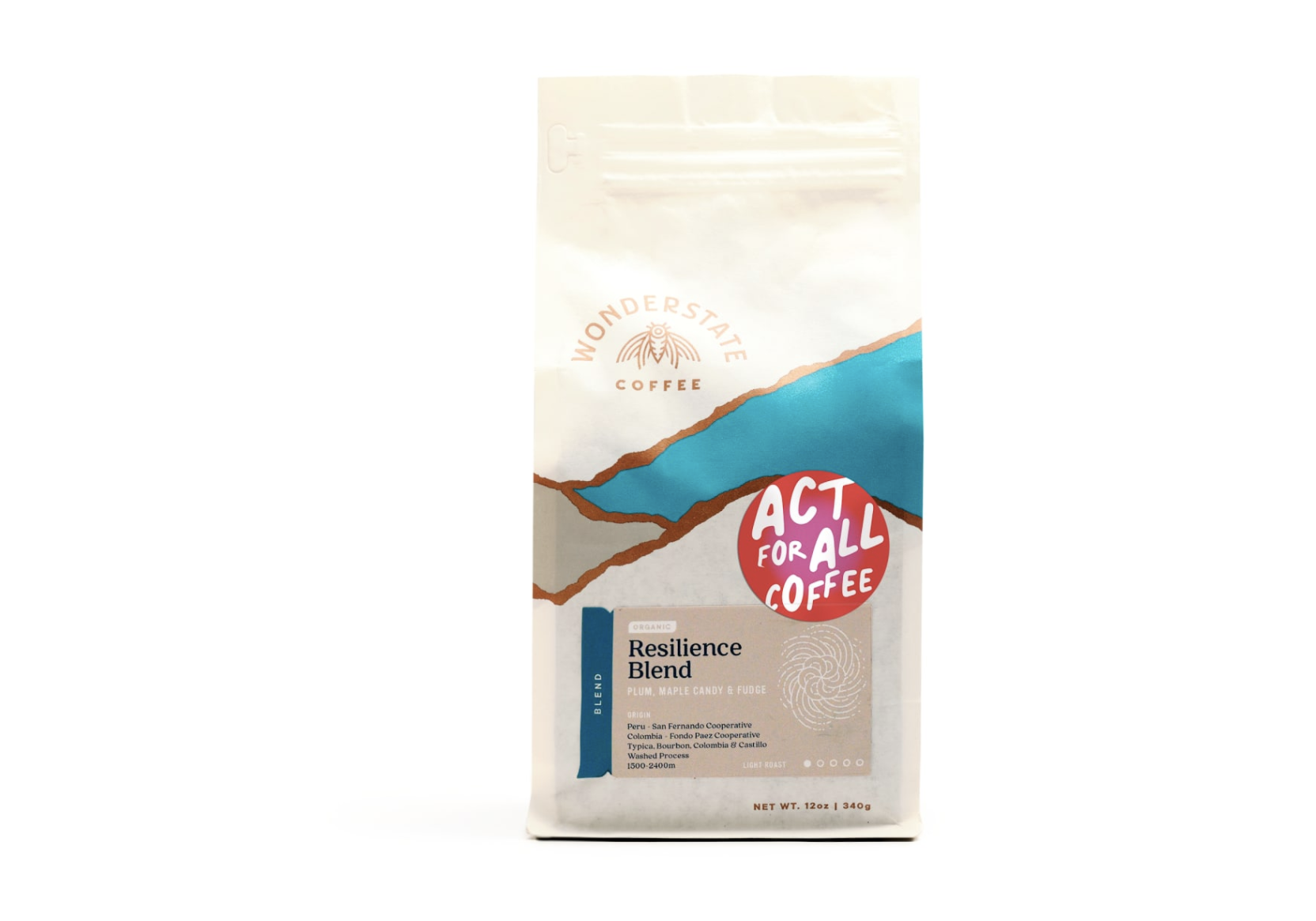 $2 from every Act for All Coffee: Organic Resilience Blend will be donated to Grow Ahead.

Going on six years of coffee conversation, Trad takes his brew black and enjoys evening hikes, mardi gras, and figure skating with his fiancé. The very first cup was poured at his grandfather's house at seven years old on a cold, wintery morning, and followed by four, raw cloves of garlic. That sensation changed everything, for better or worse.